A charity bike ride has changed my life :)

If you’re watching this and feel like you’re getting sea-sick or experiencing an LSD trip, I apologize!!! haha YouTube told me my video was “shakey” and offered to stabilize it, and instead my video came out pretty trippy!!

Check out my video from the BC Long weekend! Some friends and I went out to Fort Langley for some serious cycling, and we went all over the Fraser Valley.

It was AHHHHMAZING! I sound like a broken record, but I just LOVE cycling through farmland and lush countryside. It’s so calming.

There were a couple of gross climbs though including – one NASTY, SUPER STEEP hill! I cannot believe or even comprehend how the others managed to scale that mountain of a climb…. I walked it up AND THAT WAS painful! Super stretched-out calves…. goes to show how steep of a hill it was!

It had been a looonnng time since my last Comor Sports group ride. So when I saw that they were heading to Iona beach a few weeks ago, I jumped at the chance to join them again and brought my friend Oliver along with me. The evening was spectacular – nice and sunny, not too hot (although my camera & phone were sweat drenched after the ride – so gross!), and a good-sized friendly group. 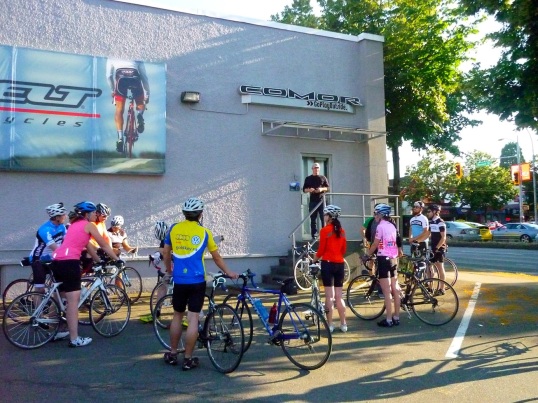 Blair giving us an update on the evening’s group ride plan.

Blair gave us a run-through of where we were heading, and told us about the special surprise he had in store for us that eve. There were prizes to be won via some races. Sort of like the cash primes I saw professional cyclists race for in the Tour de Delta, Gastown GranPrix, etc. Pretty neat! I didn’t think… ahem I knew I wouldn’t be able to compete though because I am not a super fast cyclist. But still – I thought it was a great idea!

I had been down to Iona Beach once before, way back in May, and was half expecting us to take the same route my friends and I always take when we cycle to Richmond…. but the route was slightly different. We cycled all the way down the Cypress bike route and crossed the bridge used by cars heading towards the Airport – can’t recall what it is called right now.

Once we reached the flat, long stretch of road leading to the beach we REALLY started to pick up the speed. I ended up in a group towards the back and we worked on drafting super close to one another in order to close the gap between us and the group ahead of us. Was really fun but really tough. I mean really tough! haha I had never really cycled at a consistent fast pace with other riders.

I ended up falling behind towards the last little bit and I drafted behind the SUV that Blair was driving. It was pretty funny really…  and I joked about it when I reached the pack who were inhaling their energy gels and bars.

You would think this is pretty daft – but others do it all the time! Such as…

Crazy! I doubt I would ever draft behind such a large truck. A sudden brake, and you’d end up as a pancake on the back of the truck! But behind an open-back SUV where I can also chat with the driver? Why not?

Heading back to Vancouver, I was offered the opportunity to jump in the vehicle if I was feeling too tired… but I wasn’t really suffering that bad. I am sure my face looked like I was about to die BUT I just needed to catch my breath and go at a slightly slower pace.

So John kept me company most of the way back and we had a good chat about cycling, bike fittings, and other random stuff. I don’t have a map of the exact route we took back – but roughly it was Eastward bound on SW Marine Drive, up Camosen Street, through Pacific Spirit Regional Park, through Point Grey, including the beautiful Bellevue & Belmont intersection, and then Westward bound through Kitsilano towards the bike shop on 4th and Burrard.

Cycling through the Regional Park and via the Bellevue & Belmont crossroads was definitely a highlight for me. I had never been in that park before or seen the gorgeous view from Bellevue & Belmont, and I wished I had a camera strapped to my bike or helmut at that moment. The view of English Bay, the tankers and the city at dusk was just magnificent.

Somewhere in Kits I realized I had a flat tire – thankfully this happened towards the end of the ride!! So I rode into the Comor Sports shop for a quick repair job. Turns out a tiny yet razor sharp pin prick was stuck in my tire – good thing Blair spotted that one!

Blair changing my tire after a flat.

After that, we joined the group  at Ceili’s Irish Pub for some beers & burgers, and I discovered that I had won a prize for the night! Whhhaaat??? I won a gorgeous Marin Bikes hoodie – the “Red Lantern” prize for keeping the most consistent speed. 🙂 Woo hoo!! I was really touched!

I really enjoyed chatting with the other riders as we ate and the place had an open mic session going on with really nice blues music – something you don’t hear too often in Vancouver!

My yummy burger, salad (so healthy!) and beer! A fine treat after a good ride!

BIG THANKS to John for keeping me company as we rode back into Vancouver and to Blair for helping me draft behind the van and for changing my tire!

A couple of weeks ago some friends and I headed up to one of the prettiest parts of the B.C. coast…. the Sunshine Coast.

The plan to head up there fell into place thanks to the fact that I wasn’t sure if I could enter the States with my 2004-issued Maltese passport. I wouldn’t ordinarily travel to the States with this passport, but my new Canadian one hadn’t arrived in the mail yet. So an original plan to re-do the Point Roberts, WA trip fell through and was quickly replaced!!

During the 4 years that I have been living in Vancouver B.C. I never once made it up to this part of the province – but I’d heard a lot about it. So naturally, I was super excited!! Kathy grew up in that region so we relied on her expert advice to plan out the route and show us the sights – hence why I referred to this operation as ‘KP Tours’ on the day 🙂

To arrive at Sunshine Coast, we took a BC Ferry from Horseshoe Bay. This was the first time I had EVER travelled on a ferry with a bike, and it was amazing. I just LOVE leaving the city behind me, to explore a whole new area, and I love travelling by boat.

The route we took was as follows:

The ferry dropped us off at Langdale, from where we started our cycling trip via Gibsons, Roberts Creek, Davis Bay, Sechelt and back. A total of 62km – which is pretty good. 🙂

The weather was truly glorious. So sunny and lovely – but extremely hot. I REALLY wanted to dump the bike by the side of the road and jump into the ocean so many times! Yes – when it’s cold and rainy, I complain, and when it’s too hot and sunny, I complain…. I’m like the cycling Goldilocks trying to find her perfect weather conditions for bike rides! 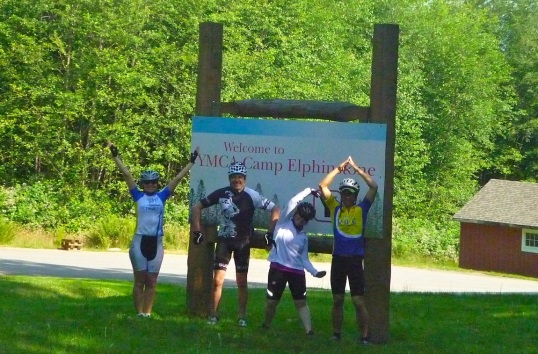 We cycled by the YMCA camp and had to do a YMCA pose 🙂 Few people may know this already… but for those who don’t, my first ever job involved dancing to silly songs like YMCA and those from Grease for ESL students…. those were the days! huh?!!

I had a near-miss on one of the roads leading up the highway 101… I unclipped my shoe to stop but for some reason I started to loose my balance. Desperately trying not to slam into the hot tarmac I hopped on my right foot to prevent the fall, all the while heading out into the oncoming traffic (which I was unaware of). It looked like clumsy once-footed tap dancing, and just as soon as I finally found my footing and came to a stop, a van zipped right by me. Probably a foot away from me. Close call!! 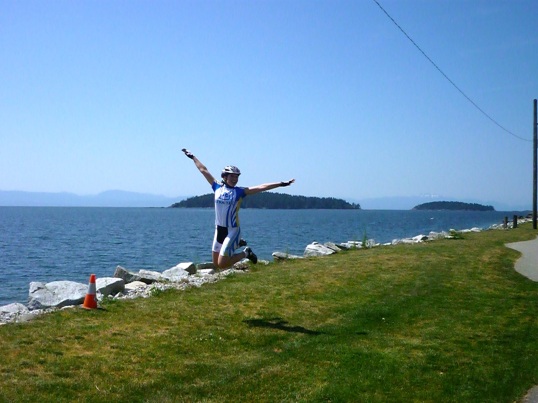 And of course, we took jumping shots!! BUT this time I figured out the “how to” ahead of our photo shoot. In pervious attempts we’d do a million jumps, trying to time the jump with the shutter speed. BUT… just prior to this trip it occurred to me to use the continuous shoot function – where you get a bunch of shots and can select the one that shows the person in the air. Using this function on my camera is pretty simple –  the quality is kinda reduced and only OK for digital media though… but that’s all I really need it for.

As we were having lunch at Pier 17 in Davis Bay we looked at this giant map of the Sunshine Coast – there are so many places to swim, sail, dive, camp, hike, etc. Would love to spend an entire weekend up there sometime – rent a cabin with some friends and enjoy the great outdoors! You don’t have to travel too far from the city to find stunning retreats!

And now for the moment you’ve all been waiting for…. Here’s a little video I made of our trip. I hope you like it 🙂